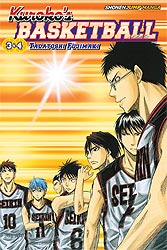 Tetsuya Kuroko doesn't stand out much. In fact, he's so plain that people hardly notice when he's around. Though he's just as unremarkable on the basketball court, that's where his plainess gives him an unexpected edge- one that lets him execute awesome moves without others noticing!

Seirin High is smashing it's way trough the Inter-High qualifiers. But to make it to the Finals League, they'll have to win twice in one day! First up is a match against the North King, Seiho High. And their day only gets tougher with their second opponent, Shutoku High. After all, the East King boasts Midorima of the Miracle Generation!